Soon after last year’s minor hail events in west-central Florida a small roofing contractor left his hometown in Polk County to set up temporary headquarters in a small strip mall just off of Highway 19, near Homosassa Springs. He began trolling the southern tip of Citrus County and neighborhoods like Sugarmill Woods knocking on doors, promising free roofs in exchange for the signing of a contract with an Assignment of Benefits (AOB) clause nestled surreptitiously within. “It’s necessary” confused locals were told “so we can inspect for possible hail damage you might not even know is there.”

A year later, they’re still there. Still trolling. Still finding damage and still finding far too many homeowners willing to commit insurance fraud as the means to a new roof–a nice new roof just like their neighbors got–over 20 on just a few blocks in one neighborhood.  Flyers are everywhere.  On door knobs. Stuck in windshield wipers.  Public Adjusters are there and in cahoots (and, for what it’s worth, exempt from the reforms currently in the House).  (See NOTE #4 below)

Workmanship takes a back seat, as does concern for the validity of promised warranties. Most disappointing, homeowners who initially smell the rat and resist the sales pitch, eventually succumb to cash kickbacks or in-kind offers like Orlando Magic tickets, if…. “you’ll just sign our contract so we can provide a free inspection for possible hidden damage; and, we’ll take care of everything; and, you get a rebate equal to your deductible; and, you have no worries; and, your neighbors all did it, and we’ll handle everything with your insurer; and, blah, blah, and more, blah!.”

Business’s nearby confirm seeing this roofers’ employees helping giddy homeowners with their new big screen TV’s–the ones they were promised before they signed. Local insurance agents independently confirm these disturbing facts. Their clients are delighted to share their good fortune (for now), as the agency’s loss ratio plummets and its’ carriers look elsewhere for homes to insure.

In a recent telephone discussion with the Division of Insurance Fraud (DIF) concerning Florida’s nearly 50,000 annual AOB lawsuits, I was told they’re investigating nearly 200 complaints of AOB abuse from other roofers–many are likely to become full blown fraud investigations, all from the same part of the state.

Again, this is just roofing! Just in Citrus County!

What about water claims?

No lie, my last report set the woods on fire! Calls and emails flooded from every corner, including one anonymous hard-copy memo, (See NOTE #3 below). I received more from industry veterans who say they’ve never seen figures as compelling as those in my last blog; AOB..an ugly iceberg! Or, I suspect, as compelling as those you’re about to read.

To see the growth of AOB and the danger it poses, look at the following chart of the top writers. 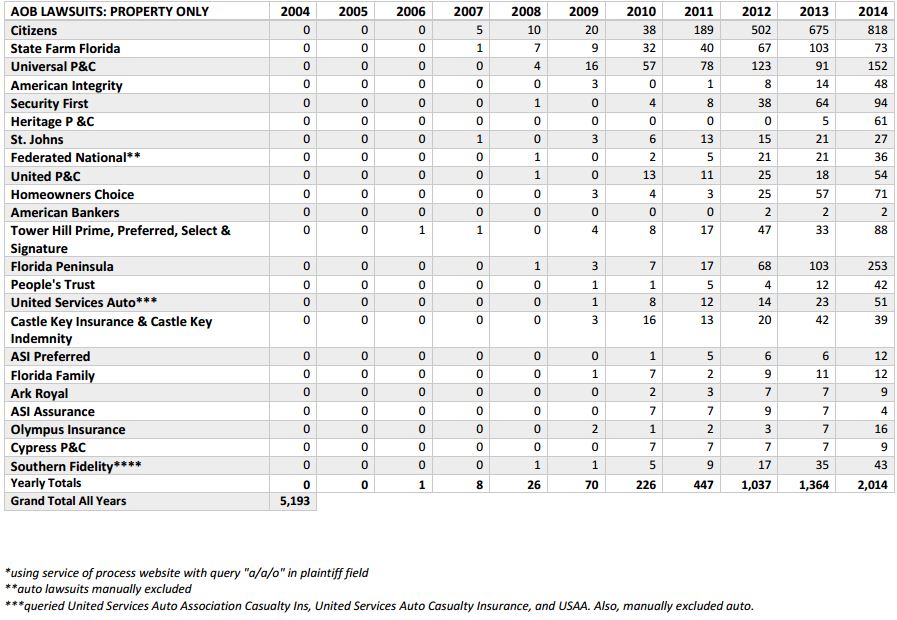 Notice; there were no AOB lawsuits filed against these insurers prior to 2006. Zero! Nada! Zilch!

Florida Peninsula was sued 253 times last year and 435 times the last two years (See DFS Report here).  And Florida Peninsula has already been sued 80 times for AOB within the first 45 work days of 2015.

Here’s the thing. Citizens has already been sued a total of 1,465 times in just the first two months of this year. That’s thirty five (35) times a day! (See DFS Report here)

One hundred and fifty seven (157) of those were AOB suits; almost all of which came from Dade and Broward counties.(See DFS Report here)

But, it gets worse!

Citizens president, Barry Gilway, confirms that 85% of his company’s Dade County water claims are “noticed” from lawyers, not policyholders–no call to the toll-free claims number; no loss notice completed by the policyholder or agent. And, the same ten law firms are responsible for over half of “all” Citizens lawsuits.

Why bother with filing a claim when filing suit starts the ticker on the $400 hourly fees necessary to force payment of bills inflated by an average of 60%?! (See NOTE #2 below).

Example 4: A 1,183 sq. ft. home with excessive drying days inflated by over 350% or $12,792. See highlights for overhead & profit of $2,947.86 and a separate fee for “Equipment decontamination” of 28 units at $35 each. This was a Category 1 claim from a leaky “laundry room sink”. No decontamination should be necessary. Such fee’s shouldn’t be in addition to a separate “overhead” fee.

So, there you have it. Including the “end notes” this is more than you ever wanted to know about AOB abuse, again. And, there’s still more you haven’t heard, including how much it’s all going to cost homeowners and families if lawmakers don’t do something about it soon.

Stay tuned for my next report with more on AOB lawsuits by specific vendors and why simple politics may be the biggest barrier to a solution.

NOTE #1: Keep the data limitations in mind here. This number is low because DFS Service of Process (SOP) filings don’t “require” the plaintiffs to identify the suit as an assignment of benefits. The true total, therefore, is likely much higher. Also, State Farm Florida, one of the largest residential writers, shows only 73 AOB lawsuits. This is likely because the person reporting to DFS did not specify State Farm Florida but only entered “State Farm”.

NOTE #2: In addition, 84 percent of all Citizens claims in the past five years have originated in Miami-Dade, Broward and Palm Beach counties.   The same ten law firms are responsible for over half of Citizens lawsuits 60 % of which come from Miami-Dade. 70% of first notice of loss are water claims. 65% of those claims involve a broken pipe–the kind of claim where the plumber gets a referral fee; as of December 2014, 562 lawsuits were filed for water claims and 98% of those filed were from the tri-county area, Miami-Dade, Broward, and Palm Beach counties, and; AOB water claims are 60% higher than the non-AOB claims, for Citizens. Those claims are coming in from an attorney, a notice of lawsuit, or public adjuster.

NOTE #3: Along with others, including lawmakers, the media, Cohen & Battisti law firm and the IRS Criminal Investigations unit, I received a copy of an anonymous memo from someone claiming to be the “Remediation Cockroach.” It was ostensibly written by a small water extractor fed up with dishonest practitioners of his trade; including those he claims lied during legislative hearings. I don’t take anonymous missives seriously, but…you can read it here if you want. If the author wants to send me facts, supporting documentation, pictures, whatever; I’m willing to listen and publish that which I can verify; but, he/she must identify him or herself. NOTE: Though I will never reveal your identity to anyone, neither will I publish as fact unsupported accusations from anonymous sources.

A collection of miscellaneous door-knob flyers from one neighborhood, here.

This piece was written by Scott Johnson and originally published as “AOB … The Woods are on Fire” and is available here.